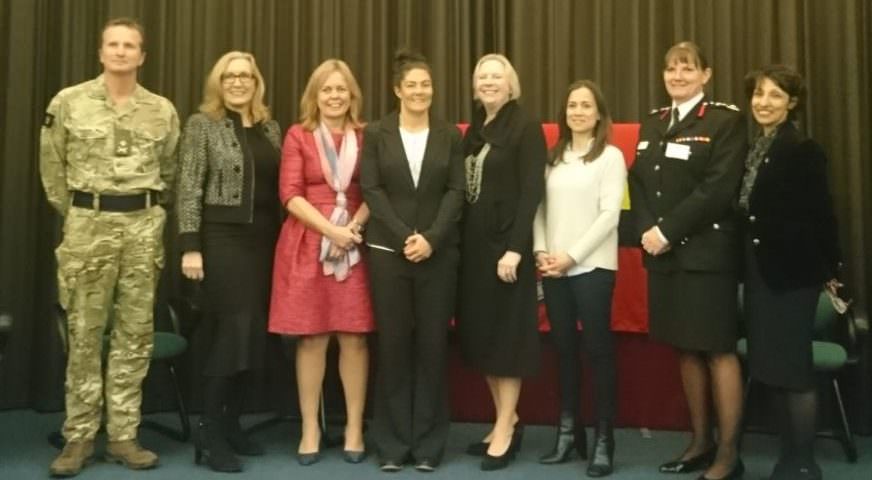 On Wednesday, 13th December 2017, X-Forces CEO and Founder Ren Kapur MBE brought together some of the country’s thought leaders, in partnership with the Royal Military Academy Sandhurst (RMAS), at the Women 100 Female Leadership and Influence Strategic Forum.

The event, which was introduced by Commandant of RMAS,  Major General Paul Nanson CBE, featured a keynote speech from London Fire Commissioner Dany Cotton – now one of the highest-ranking women firefighters in Europe – and a panel session chaired by Ren Kapur MBE.  Panellists included Charlotte Avery from the Girl’s School Association, Julie Baker from NatWest, Gemma Rowland – British Army Officer and International Rugby Player, Jenny Scott from the BBC and Susan Turnbull from Help for Heroes. Guests were then invited to join a series of workshops on topics including Peer Advocacy, Ethical Leadership, the Power of Networking, Unconscious Bias & Stereotyping, Influencing Organisational Culture, Behaviours and Policy and Myth Busting – Access to ‘female minority’ employment.

What an incredible event and what a way to celebrate 100 years of women in the Army! The last 100 years have seen a huge change in women’s role in the Army; from 1917 when women were only allowed to enlist into the Army in nursing roles to 2017 where they are now being included into the Armed Forces at all levels. It is so important that we mark and celebrate these important milestones and that we look forward to the future.

The event highlighted some key messages around peer advocacy – including mentoring, removing barriers and improving confidence and resilience at a young age.

For Commandant Major General  Nanson CBE, the key focus is attracting young female leaders. As he said in his introduction,

My frustration is that 9% of cadets are female – I’m competing for talent!  How do we attract young female leaders?

Charlotte Avery summed up the solution to this by saying,

We need to build confidence in young women and encourage values of community and teamwork. You have to find in your community the sort of advocacy that works for you.

This event will create a legacy in the form of a report which will include highlights from each workshop. This  will enable X-Forces and RMAS to build on the insights from Women 100 so that we can host more workshops in the future and continue to celebrate this fantastic progress.

This event was a wonderful demonstration of the collaboration with the services, the corporates and the third sector. There was so much invaluable information provided that allows us to be able to continue the momentum and build on the legacy of Women 100. As an illustration, Dr Deborah Goodwin OBE, MA, M.Ed., Head of the Department for Communication and Applied Behavioural Science, RMAS ,has already agreed to host a Bias and Stereotyping Workshop in the coming year,  which is fantastic news!

For X-Forces,  the event was a huge success and our sincere thanks go to some of our key partners who were involved, including NatWest, CS Healthcare, Landmarc, Liverpool City Council, Help for Heroes, The Royal British Legion and the Army Families Federation.