Teamwork with a purpose: Uniting the Forces community through adventure and challenge - X-Forces Enterprise

Could you be a ‘Parentpreneur’?

Could you be a ‘Parentpreneur’ Part 2: Dadpreneurs

Teamwork with a purpose: Uniting the Forces community through adventure and challenge

On 8th March 2019, in harsh conditions, a group of military wives summited the world’s highest volcano, Ojos del Salado, standing at 6893m in Chile.  This was the flagship expedition for the organisation ‘Forces Wives Challenge’, the brainchild of Heather Sharp.

Heather knew that attempting to climb the highest volcano in the world would be extremely challenging for the 12-strong female FWC team, all of whom were novices.  In order to be ready for the 17-day-long expedition, team members undertook a progressive training program and a variety of training weekends.

The joint purpose of this flagship expedition was to raise money for The Royal British Legion. TRBL was selected by Heather due to the charity’s initiatives to tackle loneliness and social isolation in the Armed Forces community, the theme at the heart of the FWC.  The fundraising target for the Ojos del Salado expedition of £10,000 has not yet been reached – donations are welcome via their JustGiving page.

“That was the hardest thing that any of us have done in our lives. Every step above 6500m felt utterly exhausting but we were determined to fly the FWC flag.

“Prior to applying for the volcano expedition most of the ladies had never climbed a mountain and most definitely didn’t own any walking boots. They now practically own Go Outdoors and all summited a 4000m peak, a 5000m peak with eight summiting a 6000m peak and six climbing 6893m, the second highest peak in the Southern Hemisphere (on International Women’s Day).

“I was told by so many people that it was too ambitious but hopefully we’ve proved that with determination, dedication and a team of badass ladies you really can achieve anything.”

The joint purpose of this flagship expedition was to raise money for The Royal British Legion. TRBL was selected by Heather due to the charity’s initiatives to tackle loneliness and social isolation in the Armed Forces community, the theme at the heart of the FWC.  The fundraising target for the Ojos del Salado expedition of £10,000 has not yet been reached – donations are welcome via their JustGiving page. 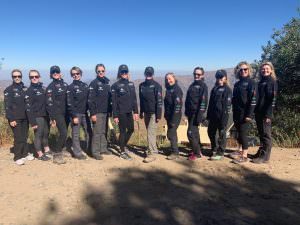 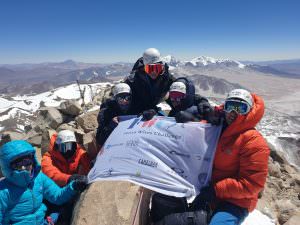 Heather’s vision for the FWC is a network that will inspire wives and partners throughout the country to come together to seek adventure and create, organise and participate in their own challenges.  Under the motto ‘Together we can Achieve Anything’, the FWC seeks to unite the military community and raise awareness of the sacrifices families make and the skills and experiences spouses can offer, delivering a positive message of how a group of women working together can overcome challenge.

The Transition to Service Spouse 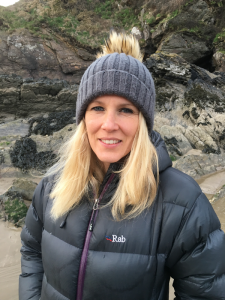 Heather left the Regular Army in 2014, after serving ten years.  With her partner also serving, the pressures of having two young children forced them to make the difficult decision for Heather to leave.   Heather said:

“When I was serving I would have always said that I knew how tough it was being in a Forces family but it wasn’t until I left that I truly understood the sacrifices made.

“I’m ashamed to say that I was completely blinkered when I left.  I wondered if I would have anything in common or if I would make any friends.  I was to be very pleasantly surprised.  Every pre-conceived idea was shattered and, on posting after posting, I found a diverse, dynamic and resilient group of women, each with their unique story to tell and their own mix of skills and experiences, who had all made incredible sacrifices to support their partners’ careers in the Armed Forces.

“It got me thinking what could be achieved if you harnessed these skills and united this community through adventure and challenge.  A challenge that had been chosen, organised and delivered by us to celebrate our drive, ambition, strength and, above all, support for each other.  And so the Forces Wives Challenge was conceived.”

Laying Foundations for a National Organisation

In 2017, Heather set about putting bones on her idea and attended a bespoke business enterprise and start-up skills course for military spouses in order to learn how to manage the set-up and run such an organisation. This programme was designed and delivered by X-Forces Enterprise (XFE), with financial support provided by the MOD’s Covenant Fund.

Along the way, Heather has recruited a small number of skilled individuals from her network to help to launch FWC and deliver her vision. Heather explained:

“The business start-up course was excellent and the advice and guidance given along the way.  I have always known where to turn to if I have needed some help.

“We are a tiny admin team coping with the current interest that has been generated.  It is wonderful to hear from so many women who believe in the concept and either want to take on challenges themselves or support those involved.

“Even at this early stage, it feels really rewarding to see the FWC providing opportunities for those that hold the fort at home to experience the same camaraderie, sense of belonging and teamwork their partners enjoy in the military.  I felt this disparity first-hand, coming from the Army with so much adventure and achievement on offer, into the spouse community where these occasions are very seldom and loneliness can be prevalent.

“Watching the transformation of the ladies who have engaged with the FWC so far, their confidence has boomed, performance at work and relationships improved and – most satisfying – strong friendships have been formed across the UK.  Many Forces wives across the country now feel a little less lonely.”

Following the volcano summit, further challenges are already in the planning in the UK and overseas, with the similar joint aim of providing valuable ‘dare to dream’ opportunities for military spouses whilst fundraising for military-related charities.  On 11th May 2019, a FWC team will tackle the 39.5km route of the Yorkshire 3 Peaks in aid of Little Troopers. 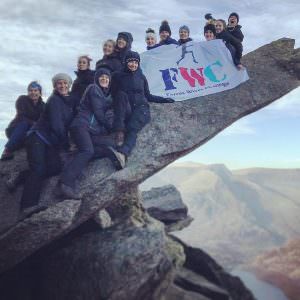 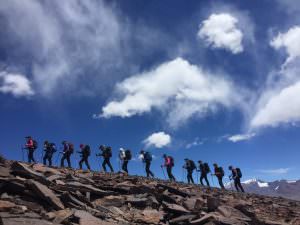 Heather caught the attention of Martin Wing, XFE Chairman, during her training course and XFE has been mentoring the Forces Wives Challenge founder since.  Martin said:

“At XFE we were closely following the FWC expedition, willing them on every step of the way.  It’s an amazing achievement and we congratulate each and every one of the ladies for their strength and determination.

“Heather’s energy is infectious and we are so proud to have helped her on this journey to make her FWC dream a reality.  Her vision to create a positive network that gives back to military spouses, the unseen backbone of our Forces community, is to be applauded.  It would be incredible if more could be done to support such a deserving cohort from within the Defence community.”

Find out more about Forces Wives Challenge at: