In 2005, 24-year old Brian Handley from Stourbridge in the West Midlands, was finding life hard. At that time, his options were limited – working in a factory, struggling to make ends meet, and finding it difficult to go out and enjoy himself. Looking to better his chances in life, he decided to join the military. It was there that he found the security he was looking for. As he said,

It gave me the core values I needed to better myself.

Over the next twelve year, Brian trained and served with the Army. He joined as a trooper with the Royal Armoured Corp and then moved to The Queens Royal Hussar’s as a Sgt, Tank Commander in 2017. During his service, he completed three operational tours in Iraq and Afghanistan, as well as various exercises worldwide. He was also posted to Army Training Camp Pirbright as a section commander and a TP SGT to train Phase 1 recruits.

Then in 2017, he decided it was time to leave. After twelve years, his priorities had changed and although he had achieved a lot, he was also beginning to get tired. When his son was born, he knew it was the right time to move on and dedicate 100% of his energies to being a dad. The question was, what was he going to do next?

It was important for Brian that he could manage his time around his family. He needed the flexibility to be close to his partner Lisa and his newborn son. He was eager to find new goals and interesting challenges, and also earn more money. It was at this time that he was contacted by X- Forces.

As he was leaving the forces, Brian also attended an X-Forces career transition course. This all helped him to solidify his plans and embark on an entrepreneurial venture that was to become his new challenge. 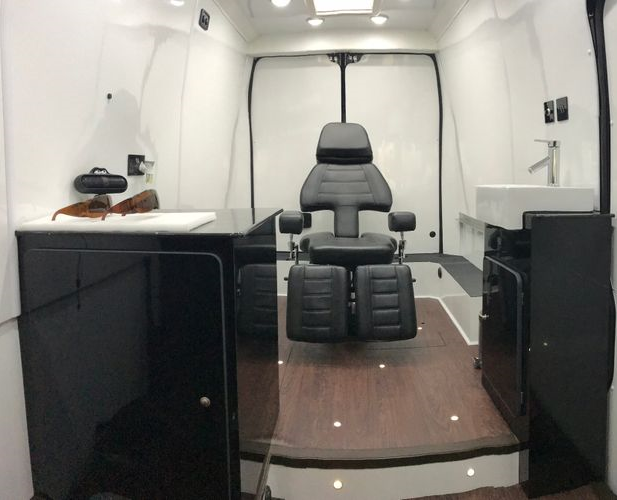 The transition period was most important for Brian. During this time, he carried out his research on his new business venture and equipped himself with the resources and qualifications he needed to provide the service. Looking back, Brian’s advice reflects his careful research.

There are different challenges to starting and running a business – the start-up costs, the daily operating costs…even advertising costs a lot. Research it well. The biggest challenge is getting used to the fact that you do not have a steady cash flow.

Brian now lives in Catterick with his wife Lisa who is still serving. He runs a new business Eraser, a mobile tattoo removal service that removes or fades away unwanted tattoos. He operates from a purposely designed vehicle that is a mobile clinic, armed with the latest technology to create a safe and professional environment. His business is off to a great start – as some of the comments left by clients show:

His business is second to none. He’s a total professional and I can’t recommend him highly enough.

Leaving the Army and setting up Eraser was certainly not without its costs or challenges, but the move has paid off. Brian is happy with his new venture and still recommends becoming an entrepreneur as a next-stage career path,

If you’re going bed at night and dreading going to work the next day, opening a business could be the best thing you could do. So if you are passionate about your career path, research and be prepared to wait for results…and always be ready for something to go wrong at some point!

To find out more about Eraser, please visit the links below:

If like Brian, you are considering self-employment and running your own business, we run regular free Self-Employment Discovery Workshops! Find out more via http://bit.ly/xfevents