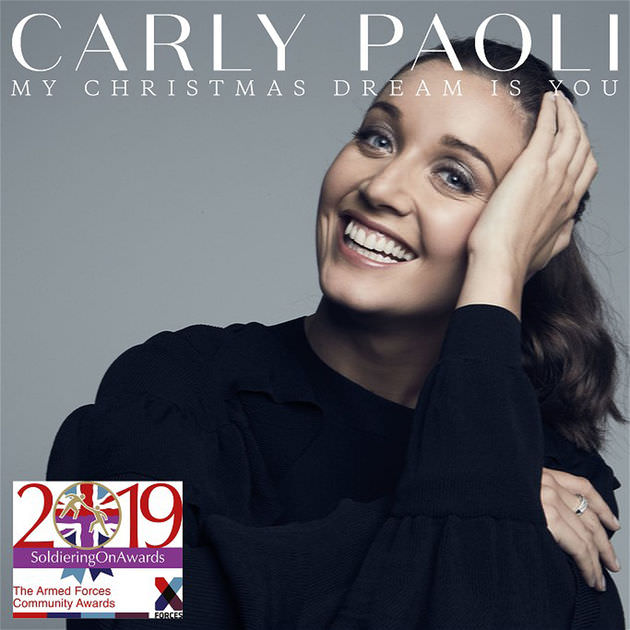 The latest single ‘My Christmas Dream is You’ by classical singer Carly Paoli – Soldiering On Awards Ambassador of Arts, BRIT Nominee and BBC Music Ambassador – has shot to the top of the iTunes video chart.

Get into the festive mood by downloading your copy for just 99p:

With a poignant message of missing loved ones during the festive period, the song and its accompanying video have particular significance in this Armistice centenary year.

Proceeds from the single sales are dedicated to the Soldiering On Awards in support of Finalists attending the Awards and the Awards’ ongoing support programme.

“At this time of remembrance, I’m honoured to present ‘My Christmas Dream Is You’ with this special video, a celebration of the men and women of our Armed Forces who dedicate their Christmas to our nation. I’m even more honoured to announce that, as their 2019 awards ambassador, income generated from the sales and streaming of this single will go to the Soldiering On Awards.”

“We are honoured that Carly has become Ambassador of Arts for Soldiering On Awards, and were delighted that this was announced by Awards Patron the Rt Hon Earl Howe PC at the recent launch of the 2019 Awards campaign. We are truly humbled that Carly has chosen to give proceeds from the sale of the amazing single ‘My Christmas Dream is You’ to the Awards. Any funds raised will go in support of enabling Finalists to attend the Awards and the ongoing support programme provided to this year’s Award – Winners. What a generous demonstration of the spirit of Christmas.”

Following her performance at the 2018 Soldiering On Awards earlier this year, Carly was inspired to use her passion for music to help others. Carly teamed up with the Invictus Games Choir to release ‘Liberty’, with sales from the single and video going to Help For Heroes, its success knocking Drake off the top spot of the iTunes video chart. Since then, Carly has worked tirelessly to support Armed Forces related charities by singing for The Chelsea Pensioners, performing outside Kings Cross station on Help for Heroes’ Transport For London Collection Day, in Debenhams during the Oxford Street Christmas lights switch on and at The Games of Remembrance in her home town of Nottingham. Carly was honoured to recently be announced as Soldiering On Awards’ Ambassador Of Arts.

The video accompanying ‘My Christmas Dream is You’ includes photography from the 2018 Soldiering On Awards night by award–winning photographer Rupert Frere.

Get into the festive mood by downloading your copy in support of a great cause:

Read more about the partnership between X-Forces Enterprise and Soldiering On Awards here.