5 Steps to choosing your best accountant

Father-of-two, Tom Fox from Coulsdon, Surrey was a former rifleman diagnosed with Post Traumatic Stress Disorder (PTSD) and is now using his personal experience to help others.

With the support of X-Forces Enterprise, Tom has retrained in Mental Health First Aid and set up his own business – Thoughtify Ltd – aiming to destigmatise mental ill health in the workplace and encourage early diagnosis.

Tom signed up and joined the army in 1990 and served nine years with the Royal Green Jackets. An anti-tank and battlefield engineering specialist, Tom completed two tours of Northern Ireland and also served in Bosnia, Belize, Cyprus and Canada. He joined the Territorial Army in 2000 and in 2002 took up a contract with the US Department of Defence working in Iraq providing close protection.

On his return to the UK in 2006 Tom carved out a career in finance, later moving into the IT sector.

He said: “Knowing what I know now, I realise that I went from a high stress, high activity environment where you have to be on the ball all the time into the financial services industry, another high stress, very target driven environment”.

In Tom’s words “The psychologists said my coping mechanisms were fantastic at that time but they were masking the underlying symptoms. You are putting pressure on yourself to achieve all the time. When you get to your 40s those coping strategies just gradually collapse and you take a massive hit. I was ill for a period of time and didn’t realise it until it gradually got worse and worse. I had a suspected heart attack, I suffered memory loss, lack of sleep, hyper vigilance, all the classic symptoms. I found I couldn’t stand up in front of people at work, I dreaded going on the tube, I stopped talking to my friends and gradually became a bit of a recluse.” 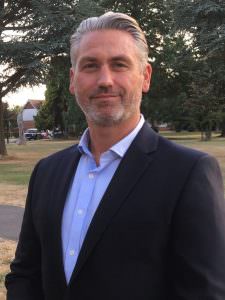 Tom, 47, was referred to Combat Stress by the NHS and ultimately diagnosed with PTSD, but admits he found the news hard to take.

“When you first realise you are actually ill it knocks you for six. You almost get worse before you get better and you have to find your own way back from that. It’s different for every individual. For me it was realising that going back into the environment I was working in before, could end up killing me. But then I thought what on earth am I going to do now? I have a family to think about.”
Tom wanted to turn his own experience into a positive and decided to take a qualification in Mental Health First Aid. He approached SSAFA for help funding the course and was able to secure grants from SSAFA, the Royal British Legion and Help for Heroes.

Having now completed his qualification in Mental Health First Aid, Tom has set up Thoughtify to provide MHFA training to the business community.

Tom said: “I know how debilitating mental illness can be. It ruined my career and changed my life. The really annoying thing is, I know now that with a little bit of prior education about mental health, either I or a colleague at work could have easily spotted the signs that I was unwell, and I could have got the right support to manage my illness at a much earlier stage. If that had happened I would never have got to the point where going to work became an impossibility”.

At any given time 1 in6 adults have symptoms associated with mental ill health, and the cost of sickness absence to employers in 2016 was £10.6 billion. That’s a shocking figure.

In Tom’s words “I think it’s important that businesses work to terminate the stigma associated with mental illness and start to create a culture of openness and acceptance, that is why I formed Thoughtify. Companies can demonstrate their commitment to corporate social responsibility, reduce lost profitability, and create a happier mentally healthy workplace for their employees by introducing training and educational courses”.

Tom deciding to set up his own business was a huge decision. “I’ve never run my own company before and I only had very limited knowledge about the tax system; accounting; building and managing a web site; creating marketing etc. All of the other things had been done for me in the past and I had taken this for granted when I was an employee. It’s a pretty daunting prospect”.

Tom attended an X-Forces Enterprise (XFE) and Help for Heroes business course to assist him with launching his business.

“I found this course very useful, as it covered pretty much everything that a person setting up their own business needs to know. The subjects ranged from what to call the business right through to tax, cashflow, IP, and building the business plan. Nothing was missed and the trainers were very knowledgeable and able to answer any question posed by the group. My group were from the Army and Airforce, of a range of ages and experience and It was also a great place to share ideas and listen to other people. You realise that everyone has similar fears and hopes and by sharing this with the group it gives you the strength you need to take the bull by the horns and get the business launched. I’ve also made some firm friends which is fantastic and I’m glad that I attended the course. The XFE mentoring team also give me a call regularly to see how I’m getting on and if there’s anything I need such as advice etc. It’s great to know that there’s someone at the end of a phone that you can call and who genuinely wants to help you and see your business succeed”.

A few challenges Tom faced along his business journey to which he overcame, his main challenge was securing initial funding.

“I needed to gain the acquired qualifications in order to become a mental health trainer, raising awareness, and gaining customers. There’s always going to be competition which means more customer choice, so it’s important to do as much as you can to promote yourself and your business and get it on peoples’ radar.
Some great words of wisdom from Tom to all individuals thinking of setting up their own business “You need to make sure your idea is relevant and there’s a market for it. Do market research, read internet articles, and ask friends and colleagues for their honest opinion about your idea before deciding to set up. I’d also like to add, you should spend as little money as possible. Build your own website, try and get free publicity etc. You don’t need to buy the latest Apple Mac and Iphone and spend £3,000 on marketing”.

If like Tom you too would like to run your own business and are considering self-employment, we run a series of free Self-Employment Discovery Workshops! Find out more via http://bit.ly/xfevents