The Plymouth-based former Royal Marines behind the Imployable app, Peter Kelly and Kieron Yeoman, have won the ‘Entrepreneurial Spirit Award’ at the Wales and South West regional gala for the 2018 NatWest Great British Entrepreneur Awards.  The announcement was made at a ceremony on 22nd November  in Cardiff.

Supported by X-Forces Enterprise (XFE) to launch their business, the founders beat off tough competition in order to pick up the award, with a record number of businesses entering the awards nationally across the wide range of categories. 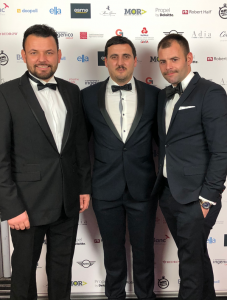 Imployable is an employment app that allows users to identify, map and track their way in to a new career.  The company has attracted a lot of attention, leading to a partnership with Google and trials with the JobCentre, Ministry of Justice and military resettlement charities before a full-scale launch in January.

Peter and Kieron came up with the app idea after Peter Kelly left the Royal Marines and quickly become unemployed.

“I spent 9 months unemployed after leaving the Royal Marines due to a lack of experience, I was highly qualified and unemployable, it was a tough time for me as I quickly spiraled in to debt and a state of poor mental health.”

After 9 months it took another former Serviceman, Army Captain Oliver Lippiett to see my worth and take me on as a project manager in his app development business. Once employed I had time to reflect on what went wrong and just how broken the system is, I had an underlying passion to change it and that’s what we aim to do with the imployable app” 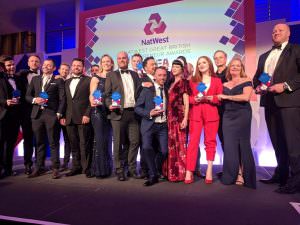 Now in its sixth year, the NatWest Great British Entrepreneur Awards has celebrated some amazing entrepreneurs over the years, many of whom are now household names. Past winners include David Buttress of Just Eat, Julie Deane OBE of The Cambridge Satchel Company, James Watt of BrewDog and most recently, Hannah and Sophie Pycroft of Spectrum Collections.

“We have been inundated with some incredible entries this year, and all shortlisted applicants should be extremely proud of themselves!

2018 has been a record year for the Great British Entrepreneur Awards in the number of entries we received. But the quality of applications has been above and beyond what we’ve seen in previous years.

Just getting to the gala final as a finalist is a huge achievement given the competition on show, so to walk away with a trophy in your hand deserves huge congratulations.”

The NatWest Great British Entrepreneur Awards celebrate entrepreneurship across a number of categories at 5 gala finals across the UK, including; Cardiff, Birmingham, Edinburgh, Manchester & London.