Ex-Army Transitions to a Metalsmith Engineer

From House Husband to Business Owner

Neil Hallsworth left the Army in 2004, opting to take on a business straight away and ran his own pub for two years. Sadly the pub went under in 2006 and, after a variety of jobs, he became a house husband for almost a decade as his family made its way around the Armed Forces world. Neil never gave up, he kept calm and carried on, turning his experience in to something positive to start a business in the coffee industry.

His return to the UK from Gibraltar saw his youngest child start full time education and this was the turning point for him. In Neil’s words “I was at a point where I could seek some form of part time work to supplement the family income. I found a job within the coffee industry, and almost immediately saw how I could take this on into my own business. This would provide me with the flexibility to work around my wife’s career and caring for my children outside of school hours. Sadly, the company I worked for went into administration as I was working on my original idea coffee vending & market sales set up. I had to completely rethink what and how I was going to operate”.

“With help from X-Forces Enterprise (XFE) I saw that taking a production route was the better solution to my current circumstances”. Explorer Coffees is a domestic based coffee roaster and supplier to domestic and trade retail sales markets, incorporating coffee accessories and explorer equipment/clothing for enjoying coffee in the great outdoors, supplier of bespoke coffee products to military units.

The biggest help Neil received was the Spouses Self Employment Workshop which XFE ran in conjunction with Greenwich Hospital. In Neil’s words “I attended the first day with about 80% of the business plan in my head, by the end of the course I’d progressed to having approximately 95% of the detail thrashed out and down on paper. It really was the kick up the backside I needed to get on and produce the outputs to launch the company. From that point on XFE has aided with the application for start-up funding and has now initiated a mentoring programme to support me through the business becoming operational”. 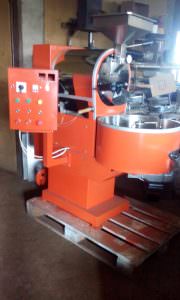 Neil also sought a Start Up Loan through XFE which was used to purchase the company’s main asset, a 5kg Technomatic Coffee Roaster, and other equipment for the start of trading.

From a practical perspective Neil had to rethink his whole business model when his friend’s business went under. A lot of the work he had done up until that point became irrelevant, even though the bare bones of his business lent themselves well to the new direction. His biggest obstacle was dealing with his mental health. Neil said “When I first left the Army in 2004 I was self-employed as I took on a Pub. Sadly that business went under in 2006, leaving me bankrupt and directionless. I vowed then I’d never go down the self-employed route ever again. It took a lot of thought and contemplation, doing so with Explorer Coffees was the right thing to do, and it probably explains why it’s taken so long to get to being operational. I want everything to be in place from day one, something I failed spectacularly to do with the Pub, so I don’t spend my time fixing things in retrospect”.

The biggest challenge Neil experienced was getting the detail nailed down. Neil said “From registering the company and opening a bank account, to setting up accounts with suppliers – it’s all about the detail. One of the hardest things was having to change tack whilst I was in the middle of planning, it was achievable because the original plan was robust enough to withstand change in circumstances”.

The rocky hill Neil endured during his business journey did not deter him to succeed. Some advice Neil has left us with is to “Go through the full planning process and interrogate every decision. It’s very easy to be idealistic but the more you put into making sure your plan is robust the easier the managing of tasks when you start to bring it all together”.

If you’re considering self-employment like Neil, find out how X-Forces Enterprise can support you: http://bit.ly/2JT9yIN

If you would like to use Neil’s business in your publication, please contact Dan Pearson, Marketing & Communications Executive, X-Forces Enterprise on dan@x-forces.com or +44 (0)121 724 0529.