Meet the Digital Consultant with an Innovative Café Car

Self-employment gives the freedom to blend very different businesses into your working day, as ex-military Joe Poole is proving with his new café car.

Joe Poole’s first day in the Royal Navy was 7th October 2002.  He had joined up as soon as he left school in order to see the world and embraced every challenge in his ten-year career from aircraft engineering to air crew.

As part of Commando Helicopter Force, Joe deployed to Banja Luka in Bosnia and twice to Iraq before changing branch to become an Air Crewman during which time he completed four tours in Afghanistan between 2009 and 2011. Joe said:

“I had an amazing time in the Navy and, having completed many challenges, I looked for one more. Nothing scared me as much as actually leaving the safety net that the Forces provides and seeing if I could make it on my own. I seriously miss the Forces, a sentiment that is probably echoed by a lot of leavers, but I feel I left at the right time for me.” 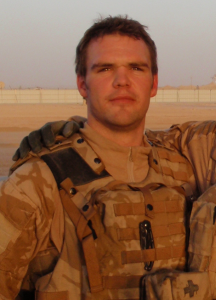 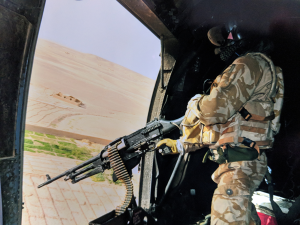 During transition, Joe applied his Enhanced Learning Credits to a Lean Sigma course, focused on a career in project management and quickly found himself in employment after handing in his ID card in the fast-paced world of digital tech startups.  Joe’s work has moved him around the tech sector including mobile commerce, Digital Transformation and Product Management but, while these environments were exciting and he was at the cutting-edge of digital development, the volatility of the sector meant he was made redundant three times in as many years, a typical scenario for most involved in these workplaces. Joe explained:

“The tech start up world has highs and lows and also a lot of unpredictability.  On my commutes into London, I had been reading many books on starting and running businesses and I began looking for options to steer my own working life.

“I’ve always wanted to set something up on my own and recent events gave me the boost I needed to seize an opportunity. I have always had ideas but none of them had passed the validation stage, before KaffeKop.” 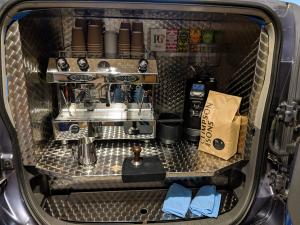 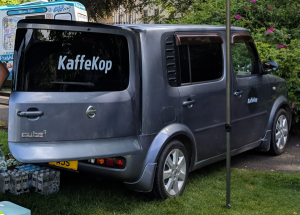 KaffeKop is an independent café car, serving speciality coffee from a permanent pitch at Keynsham Train Station and pop-up events around the country.  Inspired by similar mobile drinks platforms, and driven by a passion for coffee, Joe accessed a Start Up Loan through X-Forces Enterprise (XFE) to procure a Nissan Cube vehicle and, within 3 weeks, he had had it converted by a specialist.  Joe recounts his journey:

“I took a barista course, sourced the highest grade coffee that I could, achieved my hygiene certificate and I was ready.  Unfortunately some additional legal work to obtain the pitch delayed trading.

“I thought I had everything figured out but, with a change in management at GWR (Great Western Railway), came a longer and more detailed legal process to establish the commercial contract. The previous year, another tenant had sailed through on a handshake so I hadn’t expected the extra time, not to mention the extra cost.”

Early in the mornings, Joe mans the KaffeKop café car at the station, serving commuters and enjoying chatting as they depart for their working days, and by 10am Joe is online in a separate freelance role consulting on Artificial Intelligence and Automation in customer service from his home, where he lives with his wife Amy and son Josh.  As a Lean Sigma Black Belt, Joe’s knowledge and skills remain in high demand, with the difference now being the freedom that self-employment brings. Joe’s current freelance engagements include the UK’s leading provider of IT, communications and cloud. Joe said:

“I enjoy the social aspects of running KaffeKop, and it is encouraging to see the customer base growing; people like the coffee and convenient positioning.  I have plans to grow the business to include a number of vans, and the end goal is a traditional café.  For now, even though I’m working two different jobs, it allows me to have a balanced working life.” 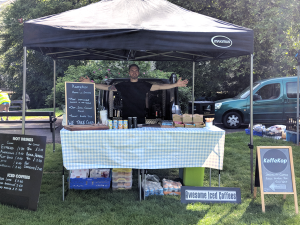 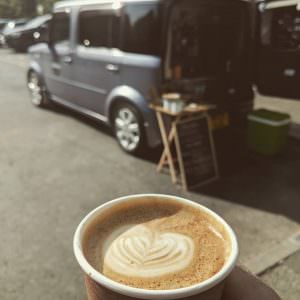 In the early stages of planning KaffeKop, Joe attended a Self-Employment Discovery workshop, delivered by XFE and funded by ABF The Solders’ Charity.  These workshops, which take place around the UK every month, consider the fundamentals of business and examine if it is right for the individual. Joe explains:

“Having the support of X-Forces has been reassuring.  The loan application process was probably the biggest help to me; I was able to amend my forecasts and business plan quickly after receiving timely feedback from my X-Forces business adviser.

“Furthermore, to be part of the X-Forces network feels reminiscent of my Forces days.  I’m looking forward to connecting with other veterans in the same position of building a business.  My military foundations give me a confidence in my abilities and the courage to pursue a life in which work is enjoyable.”

“The most impressive entrepreneurs are committed to lifelong learning.  With a calm, methodical approach that could be attributed to his military background, Joe’s success demonstrates the value of having an open mind and embracing challenge.  His surprising yet effective blend of self-employed roles offers the ability to adapt to changing influences and demands.  I am in no doubt that Joe will make a great success of KaffeKop.”